Thatcher released his first acoustic guitar solo album, The Path, on Tuesday, February 19, at Puckett’s 5th and Church in Nashville. The 14-year-old guitarist has been featured as a solo artist with the Cool Springs Youth Orchestra, on stage at B.B. Kings in Memphis, and several venues around the greater Nashville area including Tin Roof Nashville, The Factory at Franklin, The Red House, Mellow Mushroom, Franklin Mercantile, and Trevecca Nazarene University. 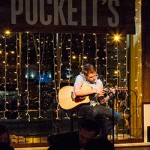 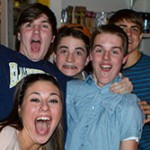 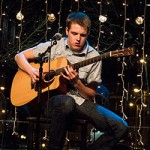 Thatcher plays electric guitar for Cumberland Blue, winner of the Nashville Blues Society competition. Earlier this month, Cumberland Blue represented Nashville at the International Blues Challenge for a showcase on Beale Street in Memphis. Cumberland Blue has played at 3rd & Lindsley, Mercy Lounge on the “Billy Block Show,” Hard Rock Cafe Nashville and other venues. Beside his solo and band gigs, Thatcher is also an Assistant Teacher at Nolensville Guitar Academy, where he’s been studying guitar since he was 10 years old. Don DeMumbrum, who mixed and mastered the project was on hand with his family. Don has worked on projects with everyone from the Oak Ridge Boys to Michael W. Smith… and now, Jackson Thatcher. Find out more about Don his website.

The Tennessean covered the event with an article by Vicky Travis: Ravenwood freshman releases first CD